Dennis Brophy has been honored with the 2012 Accellera Systems Initiative Leadership Award for his significant contribution to the standards community and to the EDA industry.

Dennis is one of the longest serving volunteers in the standards community, contributing actively to creation and promotion of VHDL, Verilog, SystemVerilog, DPCS (Delay and Power Calculation Standard), UPF, UVM, and UCIS.  He has also been a vocal participant in IEEE standardization of various EDA projects, including a member of the Board of Governors of IEEE Standards Association and the Corporate Advisory Group (CAG). He has been instrumental in the merger of Accellera and OSCI, and continues to lead the Policies and Procedures (P&P) subcommittee of the Board of Directors of Accellera Systems Initiative. He has always promoted open and collaborative solutions to industry problems, often collaborating with his competitors and his customers. 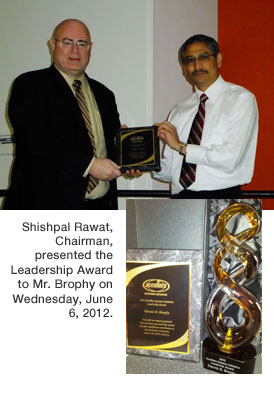 Dennis joined the VHDL International (VI) ASIC library standardization project, the VHDL Initiative towards ASIC Libraries (VITAL), as it completed its first implementation.  While much of the code was written for the 2.2b release, he took on the task to promote it a worldwide community.  He contracted with a notable VHDL technical spokesperson (Doug Perry) to help create a day-long technical seminar to train ASIC library developers.  This presentation was also shared with other VI members to help them promulgate this emerging standard.  VI transferred ongoing maintenance and standardization to the IEEE and Dennis joined the 1076.4 TAG to eventually become the TAG chair, then working group chair.

In the mid 1990’s Dennis pioneered the use of the web to explore how the ASIC library community could learn VITAL by building models, submitting them via email and getting results back as to determine if the models they were creating worked correctly.  This was all done prior to the worldwide web and at a time when VI’s only collaboration system was vhdl.org (now known as eda.org) that was accessed via a bank of modem connections to a bulletin board system.  Dennis also drove collaboration with Si2 to expand their Verilog ASIC library testing to conformance with the IEEE standard to include the IEEE 1076.4 VITAL standard.

Having successfully completed an IEEE standardization round for 1076.4, he was asked to help VI, OVI and Si2 bring together components of a standard for the Delay and Power Calculation Standard (DPCS) that included Si2’s DCL and OVI’s PDEF & SPEF.  Dennis successfully negotiated equal support by all three organizations, sidestepping the normal political issues that can arise.  Dennis worked to get Si2 and IBM to alter their contracts to have them adhere to the IEEE policies with respect to technology donation.

During this time, Dennis assumed the VI and OVI director positions for Mentor Graphics.  And, in a leadership gap for OVI, he was willing to fill the role understanding that with the natural tendency for the Big-3 to argue, being at the helm was going to require transparency and strict adherence to rules and policy in order to show no favoritism or undue influence on the work program of OVI.  Dennis, at that time, supported the move within VI and OVI to explore support of system-level languages.  Progress was initially slow.  As he challenged the OVI technical chair to focus on possible solutions by working with members and other designs around the world, he also reached out to the VI chair (Gabe Moretti) to explore combining forces to address the system challenges.

Dennis and Gabe merged OVI and VI to create Accellera with support and assistance of many.  Technical leadership and active member participation resulted in several areas of work that have become accepted industry standards such as PSL, SystemVerilog (Assertions, Testbench, etc.), and many others.

Dennis has been the vice chair and secretary of the IEEE 1800 SystemVerilog Working Group since its beginning in 2003, working with Chair Karen Pieper for nearly 10 years. Besides facilitating the operational aspects of the IEEE 1800 WG, he provides guidance on the overall standardization process. He has been one of the strongest proponents of SystemVerilog, visiting worldwide locations to promote it at conferences, seminars and user group events.

Dennis has been the face of several Accellera standards in their infancy. It is not far from reality that he has been the initiator of UPF (low power), UVM (verification) and UCIS (coverage) standards in Accellera. All these standards are currently very active in the industry and their adoption rate continues to grow, thanks to many promotional activities initiated and supported by Dennis through Accellera, IEEE, and his employer, Mentor Graphics.

Contributions to the IEEE Standards Association

As a member of the SystemVerilog leadership group (working group secretary since the founding of the 1800 WG), he extended his interactions with the IEEE to include participation in the IEEE Standards Association Board committees. He was one of three members of the IEEE patent committee that reformed and improved the IEEE patent policy, which eventually became the basis for the Accellera patent policy.  Dennis was a member of the IEEE SASB board before he was nominated to run as a member at large for the IEEE Board of Governors.  He was elected to that position over a widely popular opposing candidate.

The corporate method for developing design automation standards as done by Accellera was proving to be a good way to have standards created quickly and with market relevance.  At the same time the IEEE SA’s corporate program was launching in earnest.  Dennis had the IEEE SA business management team present to the Accellera board this newer way to develop standards within the IEEE, and when it came time to take SystemVerilog to the IEEE, Accellera followed this path.  Today, most of the EDA standards have adopted the corporate program.

Dennis was appointed to chair the IEEE Corporate Advisory Group and holds a seat on the IEEE SA Board of Governors and continues to advocate the corporate perspective in the IEEE.  He has worked with IEEE SA leadership to present a corporate standards perspective to the IEEE Board of Directors under which the IEEE SA belongs.   He is currently the vice chairman of Accellera Systems Initiative and holds United States national board representation to the IEC for design automation standards.

Dennis has been instrumental in the merger of Accellera and OSCI to form Accellera Systems Initiative. During the organization unification process, with Dennis’ experience and insights from both OSCI and Accellera, he help the core team work smoothly to migrate the complex process of unifying the operations, such as establishing the new Promotions Committee,  and continues to guide its evolution by leading the Policies and Procedures Committee.